Starfleet was the United Federation of Planets organization responsible for the protection of the Federation, the exploration of unknown areas, the colonization of habitable worlds, and the safe transport of individuals and goods. Starfleet was created shortly after the founding of the Federation, and unified the space fleets of Earth, Andor, Tellar, Vulcan and Alpha Centauri.

Starfleet consisted of both officers and enlistedmen. Training to become an officer began at Starfleet Academy with a normal four year course. Command cadets were required to take the Kobayashi Maru scenario test during their tenure, in order to assess their discipline, character and command capabilities. A cadet cruise was generally taken by cadets in their fourth year, shortly before graduation. Upon graduation, new Starfleet officers would be assigned to a ship. Lower ranking officers were generally cross trained across a number of departments beyond their course of study, and frequently changed departments or served in different departments during their career.

Enlistedmen, or crewmen, did not attend Starfleet Academy and instead signed up directly to a posting. Upon assignment, they would recieve basic training and position specific training. Enlistedmen were outranked by officers.

The Command division, uniform color gold, specialized in command and control functions on starships, starbases and at Starfleet Command. Members of the command division were trained in leadership and tactics.

The Sciences division, uniform color blue, specialized in medical and science operations on starships, starbases and at Starfleet Command. Members of the sciences division specialized in sensors, research, theoretical and physical laboratory work, biological studies, as well as technicians, medics, and surgeons. 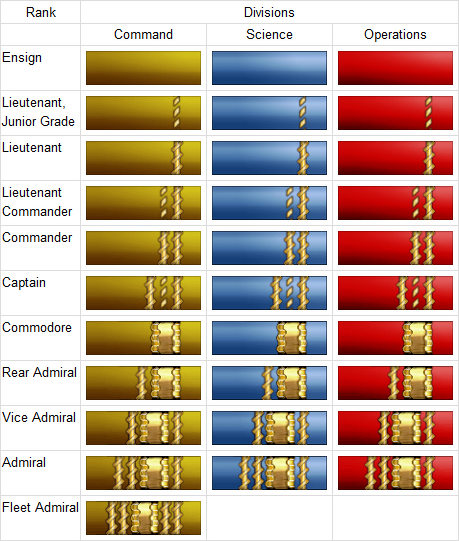 Starfleet ranks are denoted by a sleeve stripe system. Enlisted personnel and ensigns have no stripe

Retrieved from "https://classicstartrekuniverse.fandom.com/wiki/Starfleet?oldid=4091"
Community content is available under CC-BY-SA unless otherwise noted.